George Orwell’s explosive dystopian novel Nineteen Eighty-Four (sometimes re-released as 1984) was first published on June 8, 1949. Orwell completed the manuscript in 1948 and simply inverted the date to provide a year in the not too distant future. Orwell himself died from tuberculosis eight months after its publication, at the age of forty-six. 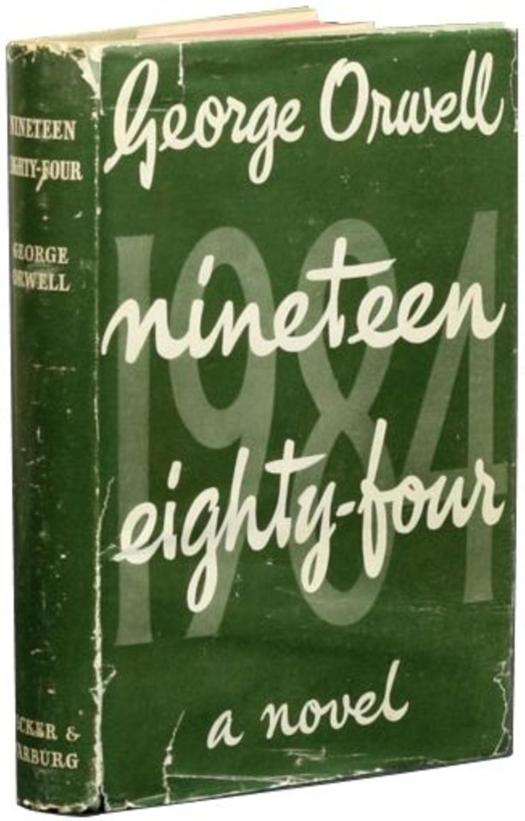 Orwell (whose real name was Eric Blair) and his wife Eileen adopted a son, Richard, in 1943. Eileen died during a routine operation in 1945. The following year Orwell, himself already gravely ill, moved to a remote cottage in Scotland, lent to him by a friend, to begin work on his new book, which was then called The Last Man in Europe. He was joined by his sister Avril and Richard and his nanny.

Orwell was bedridden by the time he completed the novel, sitting up in bed with a typewriter on his lap. “I am not pleased with the book but I am not absolutely dissatisfied, ” he wrote his agent. “I think it is a good idea but the execution would have been better if I had not written it under the influence of TB.”

The novel was well received critically on its release and sold well, providing fans a quick follow-up to 1945’s Animal Farm. It had solid sales from the start and has gone on to be translated into 65 languages and is a staple of school reading lists despite periodic attempts to ban it.

Nineteen Eighty-Four is set in a Britain that has fought and lost several wars and is now under the thumb of a totalitarian foreign regime led by the all powerful (and possibly mythical) leader “Big Brother.” Big Brother rules by the means of a cult of personality and total “mind control” of what is or is not real.

The novel’s twin worlds of oppression by propaganda and surveillance were Orwell’s warnings of the dangers of all-controlling states like the Soviet Union, but apply to any repressive regime.

Nineteen Eighty-Four has provided us with countless words for modern day coercion, apart from Big Brother and the adjective Orwellian itself: thought police, thoughtcrime, doublethink, Newspeak, and the Ministry of Truth among them. Orwell was prescient at the end of his life. We all live now in at least a version of his dour vision of the future.