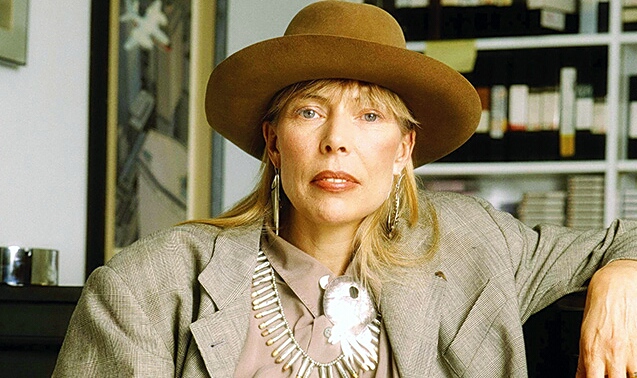 “I’m frightened by the devil,” sings Joni Mitchell in “A Case of You” (a song she wrote about her then lover Leonard Cohen). “And I’m drawn to those ones that ain’t afraid.”

Those lines kept coming back to me while reading David Yaffe’s engrossing and comprehensive new biography Reckless Daughter: A Portrait of Joni Mitchell. 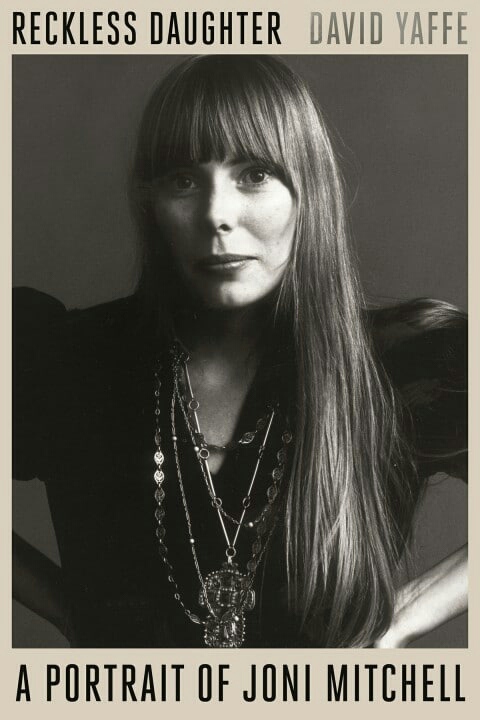 Yaffe presents Mitchell as always seeking normality and stability but being inevitably drawn to unstable and destructive people (especially men) and chaotic situations.

Despite her many famous (and famously mismatched) relationships she never lost her desire for domesticity and order.

Yaffe, a professor of Humanities at Syracuse University and the author of a book about jazz and a book on Bob Dylan, does an excellent job of presenting Mitchell in all of her complexity. He had two long interview sessions with her, one in 2007 and one in 2015. He also interviewed many of the key participants in her life.

Clearly a Joni Mitchell fan, Yaffe often sympathizes with his subject but isn’t seduced by her. He frequently quotes Mitchell’s version of events, followed by other people’s recollections and lets the reader decide where in the middle the truth might lie.

He is aware of Mitchell’s dual personae as flowerchild and someone difficult to deal with.

“With her golden hair, her joking, her miniskirts, and, of course, with the soprano end of her three-octave voice, Joni could seem so sweet, so girlish. But if she needed to bust balls, she would find a way to do it,” he writes of her at one point.

Much of Roberta Joan Anderson’s early life was spent in rebellion against her conservative parents, but when she finally left home in Saskatoon and moved to Calgary to attend art school she found herself to be the conservative one, both artistically and sexually.

She felt that she was the only virgin in the Alberta College of Art and Design and decided to be more like the wild students she admired. She became pregnant (“right out of the chute” she says) after a brief fling with a friend.

She moved to Toronto and met Chuck Mitchell, forming a folk duo with him. They married and she hoped he would help raise the child but it didn’t work out and Mitchell gave her daughter up for adoption.

Mitchell’s musical career grew in the late 1960s and into the 1970s with her ethereal image in direct opposition to flamboyant women rock stars like Grace Slick or Janis Joplin.

Her first major TV appearance was on was on the final day of the Woodstock Festival, on The Dick Cavett Show.

With her usual cautiousness she had skipped appearing at Woodstock in fear that she wouldn’t get back in time for the show, but she still managed to write and debut the song “Woodstock” on the Cavett show. The song would become the Festival’s unofficial anthem.

The 1970s were Mitchell’s halcyon years, with a string of memorable albums – Ladies of the Canyon, Blue, Court and Spark, The Hissing of Summer Lawns, Hejira and Don Juan’s Reckless Daughter.

Yaffe sums up her appeal in this period as “men fell in love with her and women felt like she was singing their secrets out loud.”

Mitchell’s later career alienated many of her fans with its excursions into jazz and electronica, but it also has many admirers. As Yaffe shows, Mitchell was always in complete control of her artistic output and there came a time when widespread popularity was not a factor in her choices.

Mitchell has had many health problems in recent years. She developed a serious cocaine addiction and continues to smoke four packs of cigarettes a day. She had a recurrence of symptoms of the polio she suffered in childhood.

She has also diagnosed herself with a painful skin condition known informally as Morgellons Syndrom, which is not recognized by the medical community who regard it as a delusion.

In 2015 she suffered a brain aneurism which has left her with impaired short-term memory.

Yaffe’s Reckless Daughter is a deft and balanced accounting of the life of a very complex subject whose music formed the aural backdrop for a generation of Baby Boomers. He is also knowledgeable and judicious about that musical output itself. He has done very well with a difficult task.

If Mitchell herself is healthy enough to read it, she may even be pleased by it, but you never know.